I wanted to start this by sharing a little background about my son as well. I was twenty-one when I had him and my pregnancy was a walk in the park. I was one of those people who would actually say the words “I love being pregnant” I gained the suggested thirty pounds and never really understood how so many women were miserable while pregnant. Well, let me tell you that completely changed with my second pregnancy.

With my daughter, it was the exact opposite. I was nauseous from month one through month nine. The only thing that made me feel slightly better was to eat, and I ended up gaining sixty pounds. I was constantly tired and it was so hard for me to keep up with my son and house work. I finally knew why so many women had such a hard time being pregnant. But, of course it is well worth every struggle. And, I am now a believer in the harder the pregnancy, the easier the labor. I had a couple of false labors at home. I would wake up with very painful contractions but then they would go away after a couple of hours. Well, finally after having three different nights of false labor pains, I actually went into labor. It was one-thirty in the morning and two days past my due date. I woke up with contractions. I thought “here we go again, false labor pains.” Only this time I was able to time them and they were regular. I used the Baby Bump app to keep track of my contractions and after laboring for two hours at home, with contractions three to five minutes apart I decided it was time to drop our son off at Grandma’s and head to the hospital. By the time we got there I was dilated five centimeters. I was so thrilled that it wasn’t false labor and I wasn’t going to be sent home! Once I got moved to the delivery room I opted to have an epidural, this was already part of my birth plan. Unfortunately, the epidural didn’t begin working until right before I started pushing. But, I’m just happy it worked then!! I pushed for about a half hour which felt like nothing compared to the two hours I pushed with my son. And, finally I had my beautiful baby girl, Cecelia Jo. She had a head full of hair just like her brother did. Weighing eight pounds and two ounces she was slightly bigger than him.  We were so overjoyed to have a healthy and happy baby. Our family was now complete.

I also planned to nurse Cece which was completely new to me. I never tried to nurse with my son so I was in uncharted territory. I am so fortunate to say that she came out with a perfect latch. Now, that doesn’t mean it was exactly easy but it definitely helped. Today she is ten weeks old and still nursing. What everyone says about the bond you get from nursing is so true. I love our many nursing sessions and snuggles. I go back to work part time in two weeks and I am nervous to find the balance between nursing and pumping. If anyone has any suggestions please feel free to share in the comments!  But, for now I will continue to enjoy my last two weeks of maternity leave nursing and blogging away my afternoons. 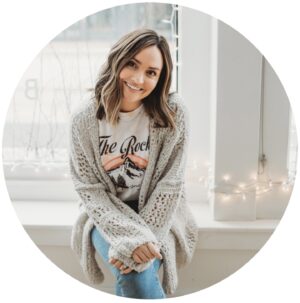